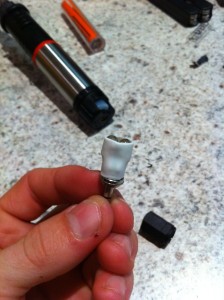 Here’s a quick guide to make a good looking, simple IR dongle for your iPhone. This can be used with such apps as DSLR.Bot or others that use the same process to produce IR signals from .WAV files.

This can also be used with any other device with a 3.5mm Jack i.e. computers, other phones etc.

This article assumes you have the basics for general soldering.

Attack the 3.5-6.5 jack converter. Thats right! Go nuts! Dissect the Jack by cutting the top off.  There is a metal barrel inside the plastic sleeve, go ahead and pull it out with your pliers. This will separate the outside case from the internals. 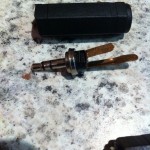 Your LED’s will need to be be soldered together with opposing polarities. This means that the big terminal (negative) side of one LED will need to be soldered to smaller (positive) side of the other. To make this look nice, all you have to do it bend LED wires flat to one side, then bend them back down and solder together as seen in the image below. 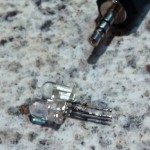 Step 3: Solder to the jack

Chances are, the wires coming off your LED’s are a little too long like mine were. Because they were soldered together, I trimmed mines right down and bent them into a more manageable shape to solder to the jack. The  jack has 3 different pins, the inside (hot), the middle (cold), and the outside (shield). For more info Google for a pinout diagram. For this tutorial all you need to do is solder the two inside pins’s (hot and cold) to the LED’s as the shield is not needed. 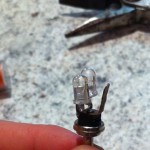 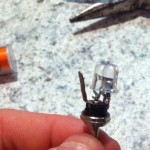 There you go! Once soldered together this should be fully working. The white plastic internal casing left from the jack can be trimmed down to fit the soldered LED’s. 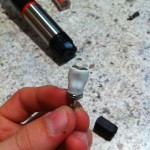 If you have the iPhone app DSLR.Bot app, go ahead and try it. Alternately you can test it with various other methods including playing an audio file with and view the dongle with a camera. You’ll be able to see both LED’s flashing all is well. 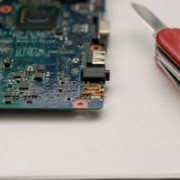 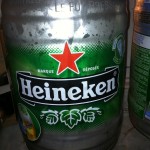 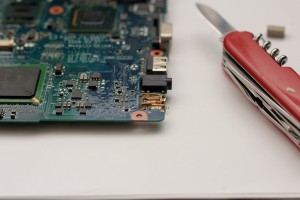